I have been not-so-patiently waiting to go live with my coloring books for adults. I’ve been looking forward to getting a copy and coloring along with those of you who purchase it. As I have been waiting for the proof to arrive for the second volume, I’ve gotten antsy. I decided to start coloring from the proof of Volume 1.

I tried Prisma Color colored pencils this time and I think I’m falling in love. I love how the tooth of the paper grabs the color, and shading is a blast. They feel like crayons for grown-ups. Liking colored pencils was a surprise for me but up until now I’ve been trying to use them on copy paper. The tools and supplies you use can be so important for full on enjoyment. 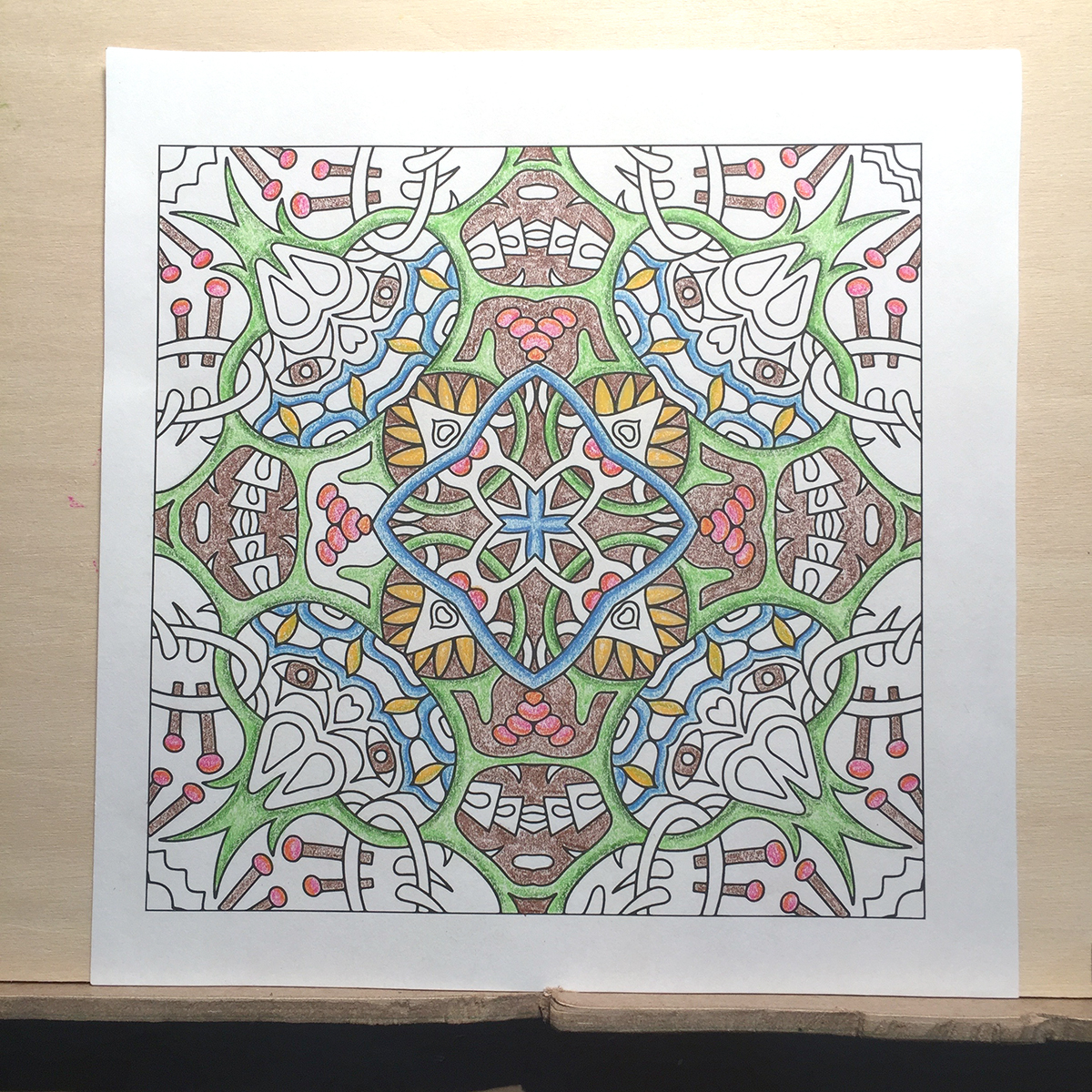 If you look closely you will see a boo-boo in design. (It has been fixed, along with another faux pas). It sucked to see that but it’s so much better than having sold some of them. I can’t tell you how many times I’ve looked at these images and did not see these things. It’s only when I started coloring each individual area that it became evident.

With that said, I’m looking to build a coloring team. Ten people who would fully color five pages for me in advance of book releases. Team members would print the pages themselves from a digital download and color them, seeing if any issues pop out and reporting back with a quick shot of the images. Coloring quality is not important…just the fact of touching each element and noticing differences between the repeated areas, or other issues.

Details will be coming in the next couple days, on my facebook coloring page. If you are interested, please pop on over there and join. If you haven’t been to the page, also check out the giveaway/random contest I’m running for a gel pen set and Dick Blick gift certificate.

I am working on something to enter into the ISGB Gathering exhibit in July 2013 called Awakening the Vision – Creative Discoveries. The guidelines: “Artists are asked to challenge themselves to rediscover their vision, play with new techniques, and explore unique ideas outside of their normal creative circle.”

This is an interesting thing for me because I know if I would sit down to make something totally new and different (without lots of time to let it percolate, like, say, years?) it would not be something that would be chosen for a show, that’s for sure. 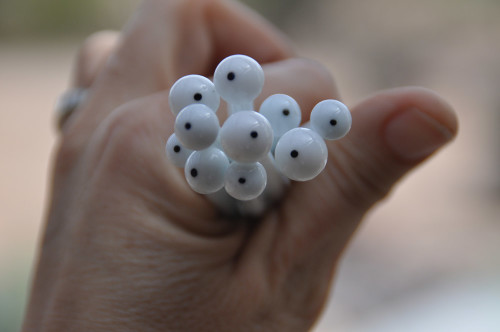 Part of my ‘new’ challenge. Individual components for a ‘new’ type of piece using the micro-mosaic technique. These are the start of eyeballs.

It also brings up thoughts about those criteria…while trying something new is an awesome thing to encourage…how different from an old style should it be? It gives an example of trying a new color. But, is that really stretching it? Is that really challenging yourself? That answer is rhetorical and a personal one. Maybe using that silver glass that has been sitting on your shelf IS a challenge to you because you’re intimidated by the price and you can’t bring yourself to possibly waste it. In that regard, that challenge could be way greater than trying a whole new, foreign technique.

Using red lines instead of blue on a bead design I already make all the time isn’t really a challenge…it’s more of a detour to see what happens. Things like that can be worked out in a quick sample before committing to something complete. So I ask myself, am I changing the color to get into the exhibit or am I really taking the challenge and trying something new for me? 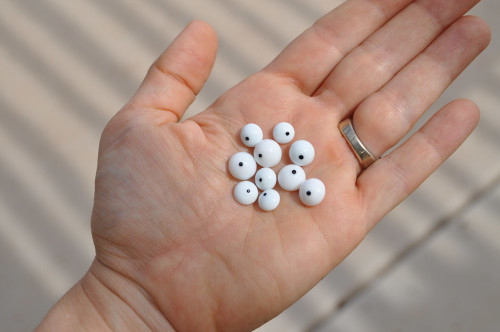 Eyeballs, liberated from the rod and ground flat on the back.

Take what I’ve been doing lately…micro mosaics. I’ve been doing them for about a year. In that time I have had to take breaks from it due to show inventory because my micro mosaic work wasn’t a fit for those shows. So, time put into the mosaics is probably more like 6 months. Is that still considered new or do I need to push something in out of that envelope to be considered new now? Are my color discoveries and technique tweaks along the way new? To me, yes but not new enough to be considered a challenge. It’s just part of the process of creating. Trying new things just to see. 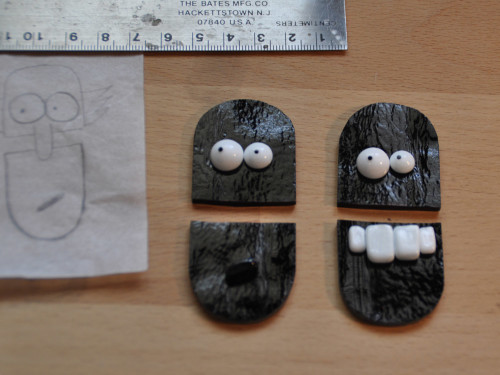 Here you see the starts of something “new”. The dilemma I face is that word. New. I have had ideas that will make up this piece for years. Desires to create something using the techniques, convey the feel I want. So, in my head, it’s not new. Coming to fruition, is the new part.

While this is all a stream of consciousness I know that what I am doing is ‘new enough’. It’s not something you see everyday. It will be new to a lot of the people who see it. The others being you, my readers, who follow my process. I really don’t concern myself with all of the above however, the thoughts go through my head because I can’t help it. Anything I fret or worry about wouldn’t be on my blog…that’s just way to personal and revealing. Something to think about though… and maybe to stimulate thought elsewhere too.

So, are you trying something totally new for this exhibit entry?

…I can’t stop.  Here are a few more and there are about six more that I haven’t photographed yet.  They are getting easier and hopefully better too. 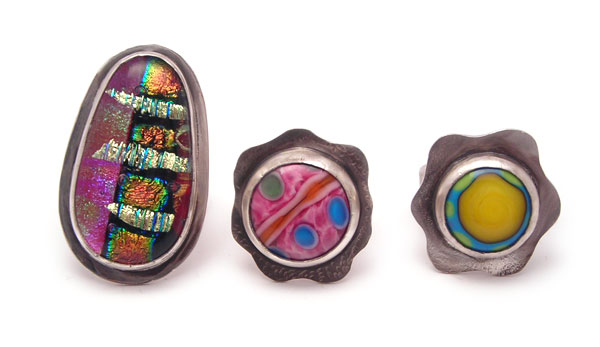 Still practicing and haven’t settled on one style I like to work with yet.  I can’t wait for everyone to see them in person at the Gathering this month.

I’m finding that the more I do, the bolder I’m getting.  You should see some of the beads/cabs I’ve set into rings in the last couple days.  They take up a third of the width of my hand when on my finger.  I’ve never really had a show piece or a statement piece and now it seems as if they’re all becoming that style.  At least in my opinion.  Of course, I’ll show them when I have a free minute to take some more photos. 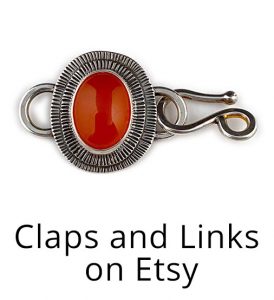