Todays review is of two tutorial ebooks by Cathy Lybarger of Aardvark Art Glass.  You probably recognize Cathy’s expressive beads and now you can learn how to get the same effects in your own beads. 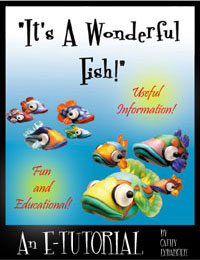 It’s a Wonderful Fish is 20 pages of beautiful, clear pictures and easy-to-read instruction that teaches how to form the body of a whimsical fish and create the eyes and lips that have so much character in Cathy’s pieces.  I’ve tried to make faces before and have come up short when trying to give them personalities.  Cathy’s methods show the nuances behind the facial features of her fish that will put you well on the road to creating your own characters beyond fish!

Cathy says that she doesn’t think that her fish are that complex so even beginners can follow the instructions.

Her other tutorial is for her Screaming Cactus bead. 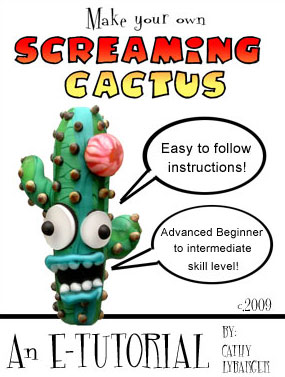 This tutorial is a little shorter, but the price is a little lower too and it’s another great resource for learning to make charicature type beads with exaggerated whimsical features that really do give the effect of the faces actually saying something to the viewer.  Cathy offers the beginner version of the Screaming Cactus (the barrel cactus) as well as a more advanced version (the saguaro cactus with arms) so all levels of beadmaker will be happy with this tutorial.

You will learn about layering colors and encased stringer and a little secret about how to achieve those great teeth!

Cathy gives you a little insight as to how she came about her beads that appear to scream.  She also includes a “cheat sheet” at the end of the tutorial that is a pictorial guide to the tutorial so that once you read it, you can keep the cheat sheet by your torch as you work through the steps without having to flip through the pages as you go.

Both tutorials are an easy, fun, read and you will be sure to pick up tips for whimsical sculpting in glass no matter what experience level you are.  Would you like to win your own copy of one of these tutorials?  Cathy is giving away two copies of her ebooks and all you have to do is comment here and on May 4th (two weeks from today) I will randomly choose a winner.  Each winner can choose which ebook they would like and Cathy will zip it off to them.

So come on, leave your comment!  Even if you already own the tutorials, why not enter and surprise a friend who doesn’t yet have it!  Do you already have pictures of your own fish, cactus or characters you’ve come up with after using Cathy’s tutorials? Shoot me a picture and I’ll put them on the contest page!  No, you don’t get an extra entry or anything but you’ll get your picture in the gallery for the world to see.

I’d much rather show you examples of other people’s sculpture from my own collection. Is that a cop out? Probably. But I don’t have time to learn sculpture while I’m in production mode. So, if you’re up for it, here we go.

The first is Amy Johnson. I picked this one up at the Gathering two years ago. If I would have known she was teaching (I wasn’t an informed member yet) I think I might have found any way I could to take her class. She just has the coolest things.

Next up is loco. I just got this one this week and I still need to head over and give her a big ole sloppy thanks! I met loco this year at the Michigan Cabin Retreat. I was showing someone a little bit of enamel magic and the bead turned out kinda cool. Loco asked if I would trade. Silly girl. I KNOW I got the better end of this deal! I’m wondering what I could send to make up for the inequity. Hm.

Ok, next! Kate Fowle Meleney. I have wanted one of Kate’s electroformed pendants for a long time now. I still don’t have one and probably won’t…they’re a little out of my budget. At the Gathering two years ago when I finally got into the Bead Bazaar (at the end) all she had left were pendants so I could only look and admire. This year I got there early and there were pieces that, with a stretch, I could afford. So I splurged (a few too many times that weekend, I might add) and got this lovely piece. I feel more complete now.

Next! Jen Geldard. You might see some of her inspiration in my work…or maybe not. Well, she does inspire me. This gorgeous pendant is mine all mine! I got it at the Gathering this year and she only had a handful of electroformed pieces. So, how did I manage to get one? I had insider information on which room she was pricing her beads in the night before the Bead Bazaar. So I stalked it and jumped her before she could leave. I think she was ok with that.

Last, but definitely not least, the infamous Sherryl Booger. I’ve shown this one before but it warrants showing again. The Bubble Gum Man…at least, that’s what she said someone else told her that he looked like. While he might look bubble gum color, I assure you that he is glass. And fantastic! I guess it could have been worse. They could have told her that it looked like spam…although, she might have taken that as a compliment. Hm.

I also have an Angry Flower bead from Cathy Lybarger at Aardvaark art but I busted off a couple of his petals so I decided not to show that one. I got her killer mirror though with a multitude of her sculpted faces and fish that she mosaic-ed (?) together into a great piece. Score! I don’t have it in the studio but I can show a picture at a later time.

So, that’s my sculpted collection. I’m not quite sure what it says about me but there you have it.