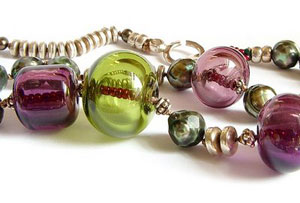 Did you see?  Did you see?  Jill Symons started a glass bead blog!  I mosey-ed over to her site today and in the back of my head I was thinking…I wish this blog was somewhere that I could subscribe to it in my reader.  I kept reading on and saw that now I can!

Sorry.  I get a little excited about things like that.

If you know Jill’s beads you know that they are elegance and perfection.

Way back when I was just starting out, Jill was the one who inspired my photos on a white background.  The way I remember it, she was the only one doing the pure white background thing.  Don’t jump on me…I know that she’s not the first one to do that and not the only one.  But she is the one that I remember being pretty prominent with that style.  I worked up my courage to email her and ask her what the heck she used for her background and she was nice enough to tell me how simple it was with just white paper.

I don’t know what she does not but her photos are impeccable, don’t you think?

This post isn’t so much of a report as it is personal observations.  The things here are only my opinions for what I’m doing in business and areas where I want to change and focus more.

Anyway…I was next to JCHerrell and Jeff Barber at the Tucson show with Susan Nestor on the other side and next to her, Shannon Hill.  Across from me was LillyPilly and Akihiro Ohkama and the Japanese beadmakers.   Beyond that, I don’t remember very well because I really don’t leave my booth during a show…but that’s a whole other story for another time.

One thing I can’t get out of my head is my display…contrasted with Jeff and JCs.  In my opinion, they both had very nice set ups that really gave added elegance to their pieces and spotlighed them well.

I’ve been kicking around the idea of how to get my booth into just one suitcase so I can start traveling to do shows.  I have also been working towards more simple displays where I don’t show everything but the kitchen sink.  It’s hard not to take everything I own when I can drive to the show but I do need to start showing some self restraint.  I don’t need six boxes of stray beads ‘just in case!’

I did well this time by showing (for the most part) a line that is cohesive.  That is, until I ran out of some stuff and had to fill in.

So, first items on to-do list for next show: