You can now buy all three of my coloring books for adults, on Amazon. Click any image to follow the direct link and ship directly to any address you choose. At $9.95 each, and they’d make great gifts, especially with the free Prime shipping.

As you can imagine, I’m very excited. Thank you to everyone who has offered up encouragement, and even purchased already.

Please post a review on Amazon. It  helps my books have more visibility, and is the best compliment an author can receive. 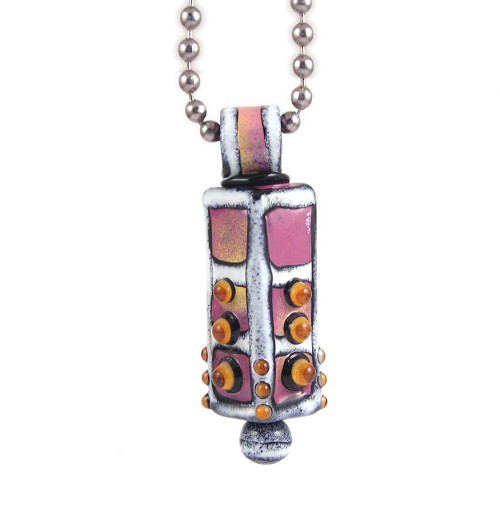 I like them but as they start to look so familiar to me and I start to bore of them I start to think that ‘everyone else’ will too. For some reason it is hard to remember that only a handful of you have seen these images on Facebook and my blog. Most of you won’t even be the ones coming to Tucson next month. On top of that, even if you were, seeing them in person is a totally different experience than a picture and they’d still be new and exciting. My boredom is not your boredom. Being in the zone of it all, day after day, the mind can play tricks on you.

Even though I know it’s mind games I think, why not change it up? Maybe there will be something more there. And sometimes there is. But sometimes it takes a step backward. Like this: 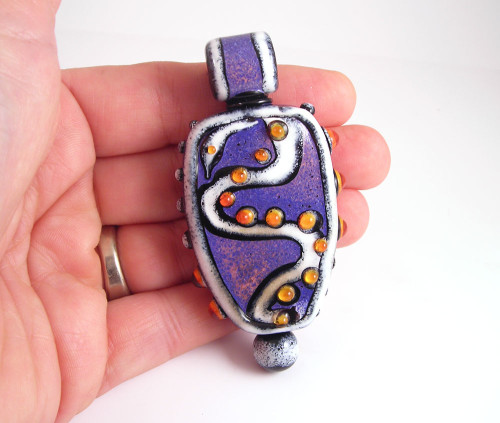 Don’t get me wrong. This is still groovy and it will appeal to those who prefer a ‘flat back’ piece to design with. Maybe I would have liked it more if the design was more thought out. See what happens when I don’t plan? Watch…it will be the first thing to sell. Wanna bet? 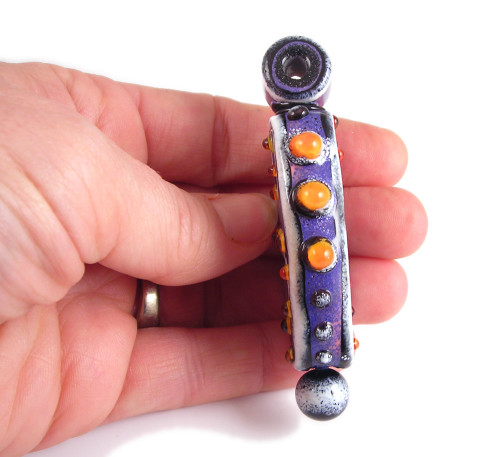 So, that little step back, in my opinion, brings me back to the original plan. I love the rectangle shape, I like the offset bail so the edge shows forward rather than a flat surface and for variety to keep me from going mad I think more about color and surface design.

I don’t sit down to design very much on paper. One of my methods is to make something that I like and while I’m in the process of making it, to be thinking about what I can do different the next time. Then next time, when I’m making that, think of something else for the next one. These beads take a long time so it gives me plenty of time to think of new ideas or color combinations. 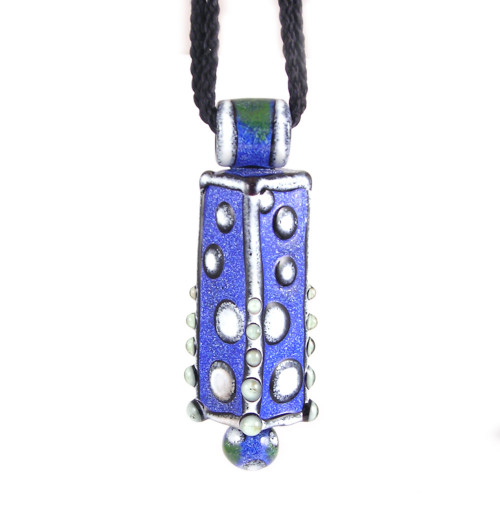 With everything going on I’ve only been averaging about two of these a day. They’re pretty exhausting to make. I attribute that to the fact that they’re covered in enamel which is stressful to work with. You have to constantly make sure it’s not boiling in the flame and at some point the white will start to burn out and get a tinge of brown. At that point you know you have to wrap it up fast and if you still have a lot to do on the bead, that sucks. While you’re making sure that your bead isn’t boiling, you have to make sure that the base is still nice and hot all over so it doesn’t crack. It’s like trying to keep a glass of water at room temperature without melting the ice cubes inside.

I could go on about the challenges I experience while making these but it’s starting to feel like complaining and that’s not what I’m doing. Honest.

You might ask why I keep making them if I’m bored with the design. The answer is, because, it’s important to have a cohesive display; both for sales and other presentations. I’ve seen that belief in action. I committed to this design line for this year’s show and this far in, I have to stick to it. Art can be all fun and games but sometimes you do need to impose a little discipline. Or a lot.

I use the word scheme endearingly. Meaning that with the economy being so sluggish and the world of selling online having changed so much since I was fully in the game, I am contemplating different creative ideas to spark interest. When sales slow, the first reaction can be to lower prices. My prices have always been pretty reasonable because I like designers to be able to buy and resell in their creations. However, I have also always considered that there has to be some mark-up from wholesale for the shops that want to buy and resell, without my prices underselling them. I don’t know why I find it so confusing. 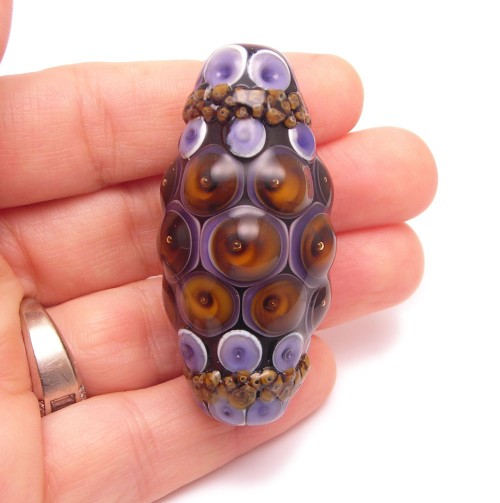 One of the things I’m contemplating again is eBay auction. Ninety-nine cent or $9.99 starting prices. The $.99 thing makes me nervous but also can be fun. Another thing I am contemplating is selling full on wholesale at the Tucson Whole Bead Show in February. If you have a business license, no minimums and full wholesale pricing.

And then, I think, all of that sounds like huge incentives to buy from me but really, maybe the market just isn’t there anymore. Or maybe, Tucson just ain’t happenin’ for glass beads anymore. Not on the scale that it used to be. That is pretty obvious…but I still have fun and still turn a profit so I haven’t gone to total doom and gloom mode. 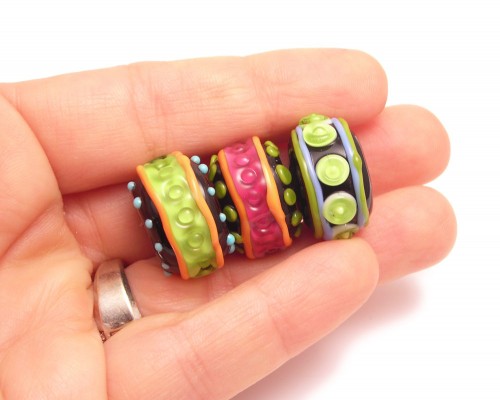 That is also causing me to re-think some other things. What do I REALLY need/want to make on a piece? Can I cut back my hourly wage and still be happy with myself? I know that I can because I’m pretty efficient. What is my intention in selling my work? Since I don’t need to sell in order to feed my family at this time, do I want to just make art for me, or do I want to sell it at lower prices just to move it? Do I want to create pieces that take more time to create and sell them for higher prices in shops and galleries?

I am trying to not think about selling.