Of course I liked the minimal display idea but I was a bit nervous as to how it would really translate in others’ minds. 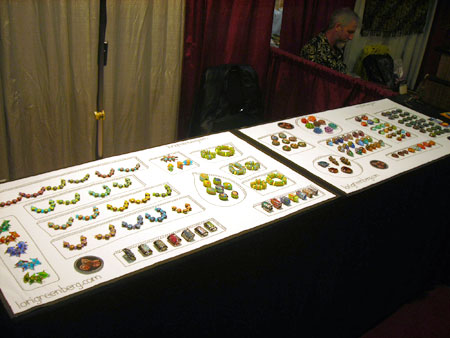 Any ‘together’ person would have worked one up and done a dry run before actually debuting it.  But not me.  Last Minute Lori strikes again.  I got to the show, put down my canvas, laid out my beads and then drew the virtual display trays around them. 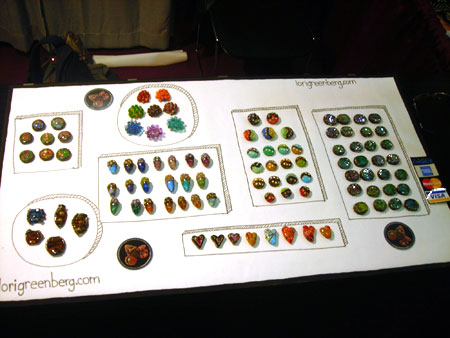 Of course, images don’t capture the ‘depth’ of this idea.  Those are hand drawn ‘trays’ in the best doodly, cross hatch fashion that I could do with a fat Sharpie and painting canvas. 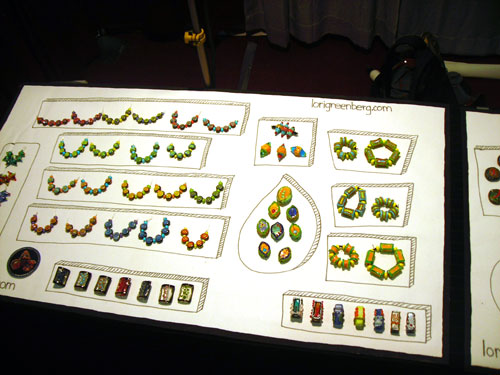 I had to fight myself all weekend from the urge to doodle on them.  While it would have looked cool, I was already getting enough attention for the displays.  You learn that you don’t want your display taking away from the work.  It’s funny how something so minimalist can stand out so much. 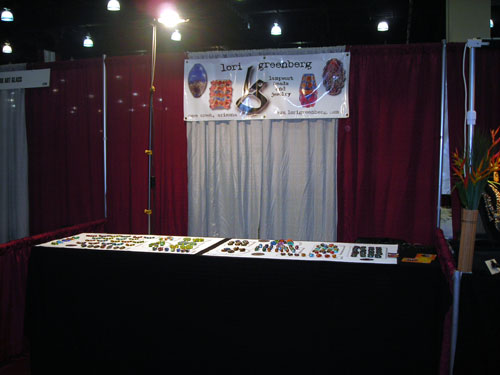 I also received comments about how the flat, light colored surface was less distracting than trays and bowls and other displays.  I took a gamble and did something totally out of the ordinary.  I was nervous but it paid off.  I’ve already brainstormed ideas with my helper (my mom) for my next display that will go along with this and I can’t wait to try that too!

It will be interesting to see if anyone else embraces this concept.

This post isn’t so much of a report as it is personal observations.  The things here are only my opinions for what I’m doing in business and areas where I want to change and focus more.

Anyway…I was next to JCHerrell and Jeff Barber at the Tucson show with Susan Nestor on the other side and next to her, Shannon Hill.  Across from me was LillyPilly and Akihiro Ohkama and the Japanese beadmakers.   Beyond that, I don’t remember very well because I really don’t leave my booth during a show…but that’s a whole other story for another time.

One thing I can’t get out of my head is my display…contrasted with Jeff and JCs.  In my opinion, they both had very nice set ups that really gave added elegance to their pieces and spotlighed them well.

I’ve been kicking around the idea of how to get my booth into just one suitcase so I can start traveling to do shows.  I have also been working towards more simple displays where I don’t show everything but the kitchen sink.  It’s hard not to take everything I own when I can drive to the show but I do need to start showing some self restraint.  I don’t need six boxes of stray beads ‘just in case!’

I did well this time by showing (for the most part) a line that is cohesive.  That is, until I ran out of some stuff and had to fill in.

So, first items on to-do list for next show:

Here is a picture of my booth at the Tucson show. (That’s my mom in there, who came to help out). It’s good for me to see it from this angle because I was behind the table the whole time.

It needs something. The end caps are nice with the actual pieces on the cover of the book and the Step by Step Beads article but I think I need some varying heights in the middle too, don’t you? The trays are raised a little but that could help too…to have them more slanted towards customers. I’m thinking some little bracelet displays behind the trays to show what can be done with the beads.