I was really liking the most recent micro mosaic. I put it out on Facebook and said that I just needed to decide on the background and then I could get it finished. Teal was suggested as a background and that was the perfect complement. So I went with teal. And it was gorgeous with the new teal cane I pulled.  Really. Until I took it out of the kiln. 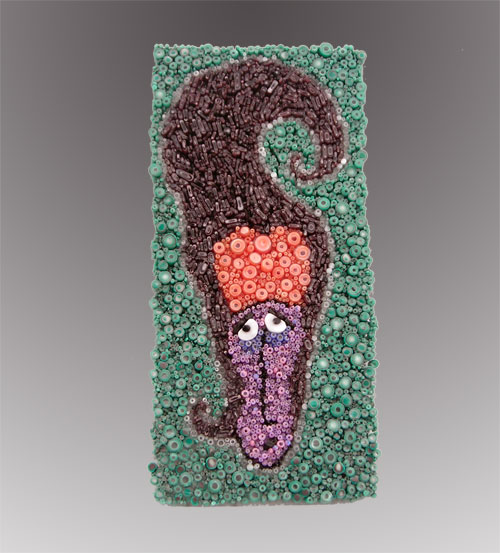 I chose the teal from one of my tested color chips but modified it. I didn’t do a color sample because it was so close to the other…yet, as I found, so different.

Before it went into the kiln it was a bright, vibrant teal. It came out with gray tones from the m-effin’ thin layer of copper green glass I put in there. I did the usual chemical treatment to remove the haze but it didn’t work. I also used a uranium yellow for a softer effect than the usual white that I use and that sucks too. GRRRRR. And the idea I had for the hair didn’t work as I wanted it to either. Blech.

That’s what I get for not testing, trying to deviate from what I know works, and trying to be all miss fancy pants. Time to reel it back in and make one that I know works, with tested colors and then back to some experimentation.

I would not be as upset if it weren’t for the fact that I’m trying to build inventory and have a 10 day vacation coming up where I’ll be out of the studio. That is why this whole show thing isn’t working for me. I don’t know how people make art and hit deadlines at all. I need days of experimenting and testing colors before I can make a piece. I can’t just whip them together.  ::sigh::

On a plus note…I’m excited about the next one to work on.