I won’t so much as forecast the future but I will continue to tell you what I plan to do, even though it seems to change as fast as I declare it.

Times past I would state goals and desires and like many, not reach many of them; especially the big ones. That used to bother me and has often kept me from calling the field into which I intend my home run ball to land. Fear of failure, or looking like one in someone else’s eyes. 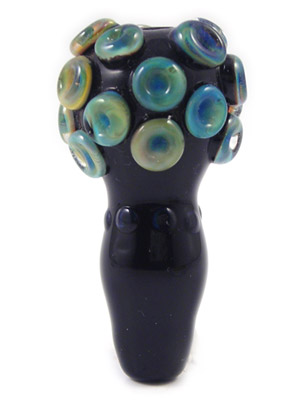 Just this last week I posted on facebook that I needed to get down to business and figure out how to turn my micro mosaics into complex murrini. This idea/decision/desire was brought about by many things converging in the last couple weeks.

First off, the interest that my work drew at the Bead Bazaar at the Gathering by multiple boro workers walking the show. I caught reactions of awe and encouragement to delve deeper into that area.

Second, a nice gentleman who got it. Really got it. With a strong European accent he pointed out to me the nuances of my Reclining Buddha piece. How the background colors were broken up by subtle swirls of complementary color, the decorative spirals made out of solid stringer, the different length of murrini chips, the outlining. He actually saw what I intended, that which most others don’t, even if they mostly get it. He then proceeded to tell me I should make it into a murrini pull and that the time invested in my piece isn’t worth the price I ask/get. He might have also been the one that suggested sending it to China to mass produce into a murrini but I politely tuned that part out.

And then, as I contemplate this changing world of glass, glass beads and the way in which they’re presented and sold I am continually reminded of the marble and murrini worlds out there with their network of collectors and it starts to seem even more appealing. It sounds like a brilliant idea…like it’s something new to get in to. I’m gung ho!

And then I start to look into it more. I follow some links from a friend pointing towards who is doing the stringer stack method, other murrini makers, methods, history, etc. All very very impressing. I don’t doubt that I could do it given time and lots of practice.

Last night it hit me though. Something about researching others’ work and methods felt like copying. Not that I’d be copying outright, but just the mere fact that I was looking to others in order to move myself seemingly forward seemed like a step back at this point in my development and the development of my body of work.

What if I didn’t follow that path that seemed so obvious and more safe? What if I continued doing what I was doing and developed my own work and style more? Who is to say that my pieces, one offs, detailed and intricate, wouldn’t start fetching collectors and be a part of rejuvenating the tradition of micro mosaic glass art? Why go and do what is already on the rise because it seems to be the gravy train?

So, after my huge declaration of delving into cold built murrini making it is clear to me. (for today anyway). Continue to follow that drum beat in my chest. The one that continually leads me back to my core desire to be a driving force, to be different, to leave something behind that says, “I did that. And I did it on my own.” In 25 years I want to be remembered as someone who contributed something, who forged forward.

Ask me again tomorrow what that means and if I’m still on that track.

One thing I do know is that I will continue to seek the drum beat of my heart and when I start to veer off the path towards what sells or what people may expect of me, I will do my best to come back to that which makes my soul sing, no matter what it may be nor what I may have declared previously.

Anyone care to join me?

Remember those goals I set back in November? Of course you don’t because I didn’t shout them out here. While I dislike failing to reach goals, I dislike much more when I’ve made them public! I need to get over that and remember that great people of the past cast a lot of nets and tried many times, unsuccessfully, before hitting on their genius. Didn’t Art & Fear say something to the effect of, if you aren’t failing, you’re not doing anything new? Something like that…and maybe it wasn’t even that book. But that thought, I believe to be true. 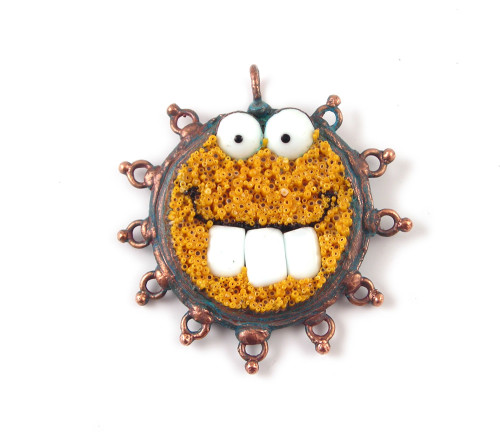 Anyway, back when I was contemplating goals and choosing my word to embody for the year I also took some time to dream. One of those dreams is to have a one woman show/exhibit at a gallery and the other is to be in a museum collection.

These ideas float through my mind and make me smile. Whereas once I was more driven financially these days I have continued to follow my 2013 ‘goal’ of peace and calm and making art for arts sake. 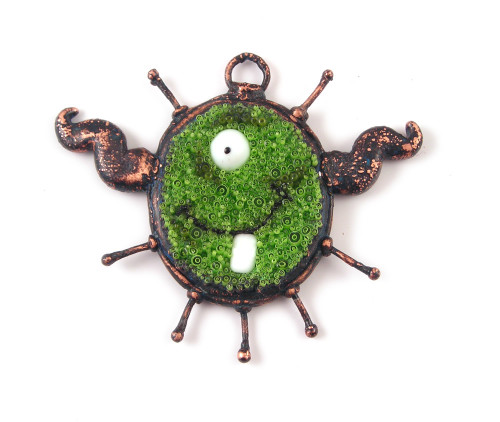 I have to say that that almost “un focus” is working out well for me. Hot yoga 3 times a week has been amazing on so many levels. It has been a struggle to transition my thought process, but making things and not worrying about either production or inventory has been very liberating. I am fortunate and grateful that I have the opportunity to pursue my art path this way. 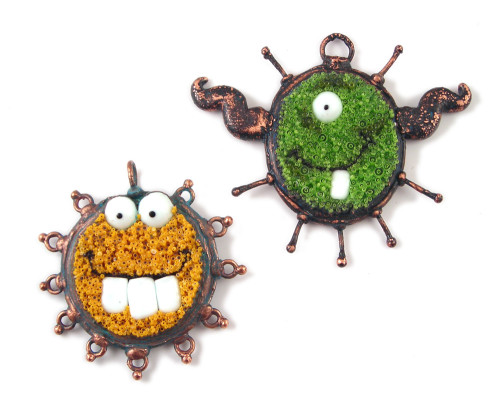 But anyway, that dream. Today I was informed that I was chosen to be part of the ISGB President’s Collection at the Corning Museum of Glass in Corning, NY. Sometimes, dreaming does work and it’s a reminder to myself to believe that anything is possible. Thank you for the opportunity, Past President Terry Hale for selecting my work, and to the ISGB for the exhibit. I can’t wait to create a great piece and to see it along with the work of 39 other contemporary glass bead artists. 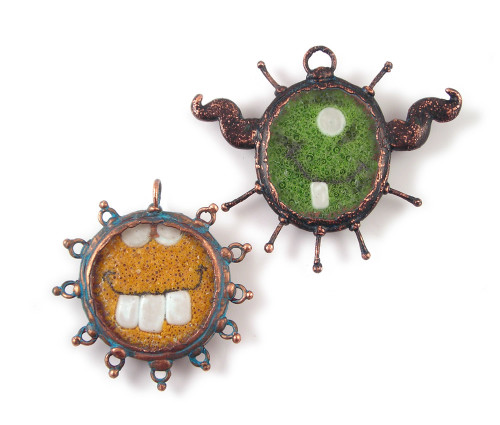 I also believe this is all coming together at the right time. The micro mosaic work is a body of work that I am proud of, the finishing work is satisfying and this process yields new work that no one else is doing.

I remember at my 5 year mark of glass beadmaking I thought to myself, when I hit 10 years I will have paid my dues and I will feel accomplished. Silly to limit myself like that but that is what I felt. I am in my 11th year of working with glass and I just now feel like I’m coming into my own. I like that feeling.

This past weekend I contemplated “Going Big”. Not necessarily the actuality of going big, but why I don’t, why I haven’t. What holds me back. Of course, we all know the answer to that…Me. I hold me back. My limiting thinking holds me back.

That led me to the next question…How do I change that cycle? How do I step out and do that, and if I can step out, how do I assure that my efforts will be successful? While there are no guarantees, there are plenty of resources that can help one reach their goals. That isn’t the hard part. The hard part, at least for me, is believing in myself enough to know I can do it and not being afraid of whatever it is that I am afraid of.

I have put some pretty big things into place for those that I have worked with and for over the years. I have single-handedly devised and implemented some pretty cool concepts and programs, I have turned situations around in office settings. There should be no doubt in my mind that I can accomplish big things. But when it comes to doing it for myself I, at some point, shut down. 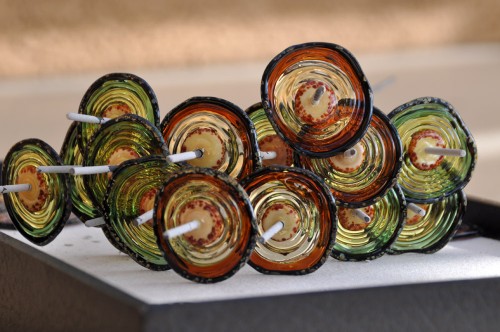 I have some tricks up my sleeves that I’ve been playing on myself. Changing my thought process, my views of myself and abilities, eliminating barriers in my brain. Maybe the stars are aligned and this could be the time that it works.

I have to admit to you though, after that introduction, you’re probably expecting something mind blowing and I am sorry to disappoint, but my first step is not that grand. Although, if I continue to like what I’m doing, it could be really cool to do installation pieces in peoples homes or offices. That would be the going big part, if I do it on the scale that I envision.

I have to give some credit here to Patty Lankinsmith’s one little facebook comment on my last post where I revealed my recent passion with disk beads and how I plan to use them. All she said was: “I like the sound of that ceiling idea in particular.”

I have had that idea for a long long time and it made me think…why am I not doing it? Why am I doing this smaller project first, and even then, only committing myself to one of the four windows to “see how it goes”? Why aren’t I just doing what I have been wanting to do for a long time?

What if it didn’t work? What if it looked stupid, cheap and cheesy? What if I couldn’t install it to look professional? I guess there is only one way to find out. And if any of those things happen, there is only one way to learn how to do it better the next time until it’s right. Right? Isn’t that how I learn everything in design? Trial and error and, sometimes, totally shocking but welcomed, complete success on the first time like with the micro mosaics.

The skylight ceiling project brings in more obstacles than the window one…installation, preventing bowing of the plexiglass over time, easy-ish removal for cleaning? I didn’t feel ready to tackle those engineering questions but as I sat for a few minutes, the answers came to me. Putting them into practice is another thing, but really, it’s not that difficult. I just need to keep the attitude that I can do anything because, really, I can.

So, thank you for commenting, Patty. I guess I’m shifting to the skylight project now, instead of the window one. If I fail, I’m coming to get you.