Anyway, I want to: 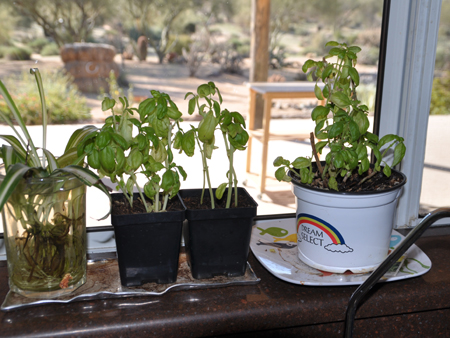 That’s probably enough for now because as I think of other things that I want to do I’m starting to get into the area of “losing weight” and “exercising”. While some of that would bring me enjoyment, it does not fit on this list.

Yesterday I came across a blog post that led me to an interesting article on the paint palettes of some of the masters.  Not the palette of colors they used, but the actual palettes they used when mixing and using their colors.  Why Preserve Van Gogh’s Palette?  As is common when I’m reading something, one line jumped out and prodded me forward in self-examination: 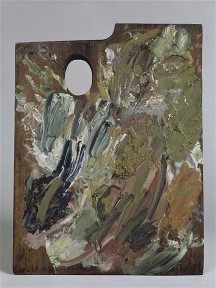 “The whole value of what you are about” wrote John Ruskin in his Elements of Drawing, first published in 1857 “depends on colour. If the colour is wrong, everything is wrong: just as, if you are singing, and sing false notes, it does not matter how true your words are.”

(the bold one is the line that strikes me).  While that can seem obvious to some, to me, it highlights something that feels like a curse. If the color is wrong, everything is wrong.  I just can’t get past it.  It is a terrible feeling to create something, and upon retrieving it from the kiln, see that something is off.  Even the slightest clash in color ruins it for me, whereas it might be just fine for someone else. 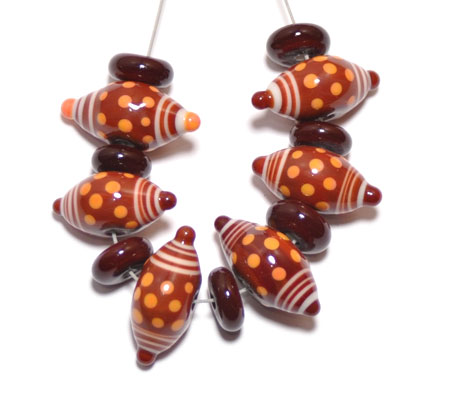 Like these beads.  Love the design, love the process, love the individual colors.  But together?  They do nothing for me.  In fact, they turn me away from making more of this style for a while because of discouragement.  That’s the curse.  I can’t just accept them and move on.  It haunts me that I could have made such a poor choice…which actually makes me laugh because they’re not THAT bad.  Maybe it’s the perfectionist in me?  Maybe it’s just the big baby in me that is throwing a tantrum because I didn’t get my way with the result and it’s laughing at me.  Dramatic?  Yes.  I have an inner drama queen. 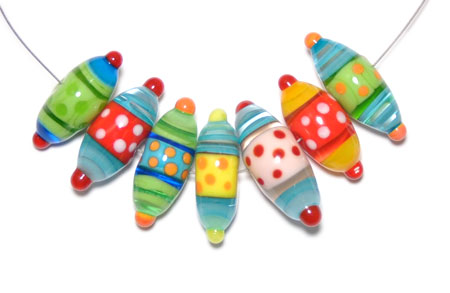 Above is another series of experiments that make me sad.  Can you believe than anything with that bold of color could make one sad?

As a former art student, I don’t recall learning about color, if you can believe that.  It is not the fault of my educators, but perhaps the fact that I went to a “party school” and didn’t focus where I should have.  Yet, I have a sense inside of me that just knows when something isn’t right.  The dilemma in that is that I can tell you something is off but I can’t tell you what would make it right.  Frustrating.

I recently wrote about the “search for inner peace” and incorporating it into my beads over on Watch Me Create.  I wrote about part of where I’m coming from but I’d like to share more with you here.  I’ve been busy, and that’s probably not the best way to search for inner peace, right?  But, like I always say…ANYONE can find peace by meditating on top of a mountain…doing it in everyday life is the true challenge.

You might remember that I’ve dabbled in Venus beads.  Not your traditional Venus de Milo goddess forms but a cross between venus flytraps and another, not-so-subtle, female representation. 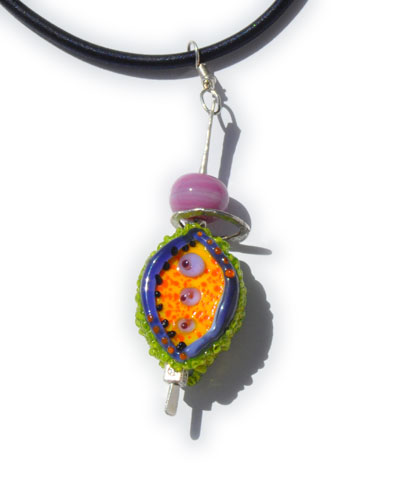 I only dabbled in them because, well, I’ve had this mindset that, if they sell, I make more. And these haven’t sold like hotcakes.  I’m on the edge of changing that mindset because I absolutely LOVE these beads and am convinced that people just don’t appreciate the true impact of them yet.  They’re ahead of their time.  Yeah.  That’s it.

I feel silly admitting it but I pondered why they weren’t selling…like that should matter with art.  But it does if you’re trying to make a living at it.  Maybe they are too bulky?  Too bright and bold?  Just too darn funky?  Offensive?  So I tried a smaller rendition and they were ok.  They sold.  Hm.  But I, as the artist, didn’t like them as much.  So that’s a dilemma. 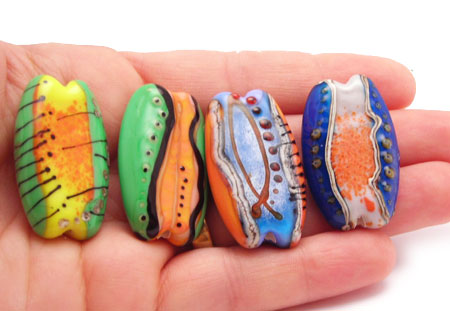 I decided it was time to get serious and I broke out the sketchbook.  Well, not really.  I got my sharpies and some shiny paper.  You  know it’s bad when I start to consider designing on paper. 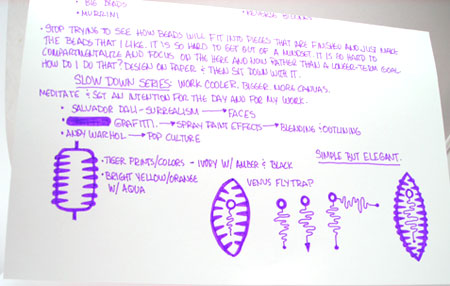 If you can read my notes you can see that I’m reasoning with myself that I should be making what I like and stop trying to fit into something else.  I guess this is the crazy artist version of talking to yourself and answering back.  It worked, some.  I made some neato beads and a few already sold to a regular customer who sometimes makes studio visits.  These two: 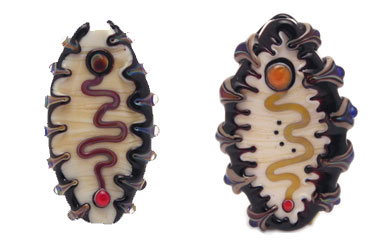 It was interesting to me that these more earthy beads weren’t as appealing to me as the previous, brighter venus beads.  What has happened to me?  So, naturally, I tried to incorporate some brighter colors into this new rendition and yuckity yuck yuck.  Here’s just one that resulted from that little educational detour: 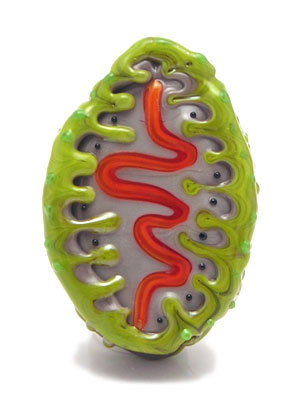 So, I decided to leave the bright colors to the original venus beads.