I apologize in advance for fuzzy pictures today. I don’t know what happened and I’m in a hurry but wanted to chat a bit first. I’m back to color mixing. This time for a cold stringer stack murrini project; my first using color.

A while back I showed you a color mix I did going from orange to white. This is part of the result: 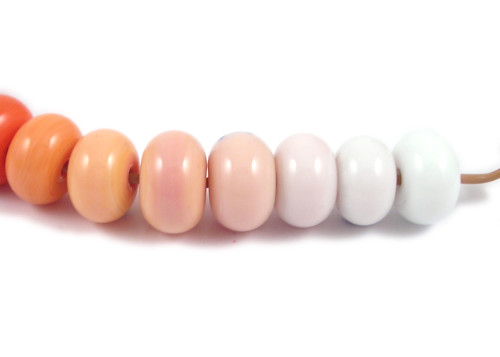 At the time I just thought I was mixing for fun and would be on to the next color. I have no idea why I picked orange and white but lookie there…kind of a flesh tone family emerged. And guess what I need for my current project? Some good flesh tones…or, at least some that will come close.

My last color mixing was not precise…just cutting and eyeballing the amounts and proportions of the parts. This time I weighed the portions, knowing that my scale was only accurate to whole numbers. That causes some variations and I have a new, more precise scale on order. Luckily, murrini isn’t an exact science, colors pull down and blend or get minimized but still, I like to know I can repeat things and I like to be able to keep an accurate record. A batch book. 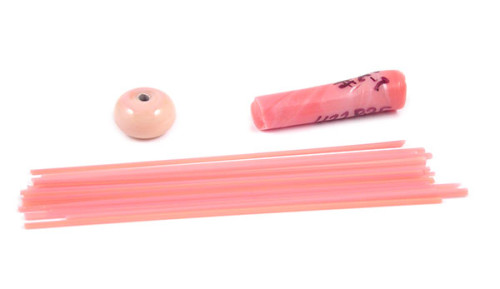 So, while I know there are variations from batch of glass to batch of glass I also know that there can be variations depending on how the glass is used. Look at the two above pictures. The mixed rod and stringer (pulled method) yield a very different color than the bead (wound method). In addition, I bet the murrini, as I make it, could yield even different color because I will be looking at the cross section of the rod/stringer that will have been fused, cooled, reheated in the kiln, further reheated to molten in the torch and then pulled and cooled again. Orange can be considered a striking color which adds to the variations, even though this particular orange does not need to be struck.  ::sigh:: Got all that? If not, move on and maybe someday, if you find yourself interested in the nuances of color mixing you will know where to look. 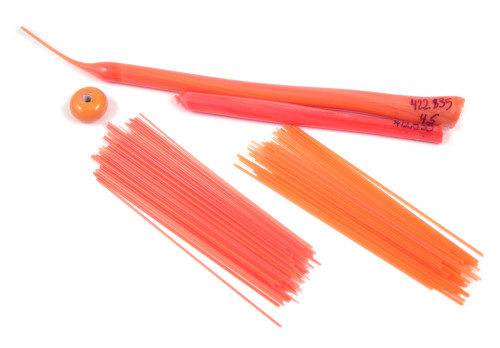 For more frustration, note the above photo which shows two different pulls with the same proportions. I could be off by .5 grams but I wouldn’t think it could make that much difference in an almost half and half mix…maybe in the tonality but to change the actual color? Crazy, right? I can only think that I chose orange rods from two different batches of glass. It makes me want to do yet another pull, wondering if I plucked a coral rod by mistake but no, I would have known the difference between orange and coral. Still, crazy crazy and a little bit frustrating.

But, I will keep a record of it all. It is fun to look back and, in my project I will use both the orange color and the coral one and mix them. It will give nice depth and I even think that in the future I might try to do two pulls instead of one big one for this exact reason. I hate the term happy accident but I do like to find something positive in the things that would normally tick me off.

Now I just have to hope that the yellows, if any, in the original rod color don’t cause the murrini to crack, as I have heard can be a problem with yellows.

So there you go…a little color chat.

I am so digging the color mixing, whether it be laying it into cane and pulling small stringer or working from one color to another in a gradation. A couple weeks ago I pulled out some more Creation is Messy Algae and Peace and did my normal 1:9 through 9:1 ratios and this is what I came up with: 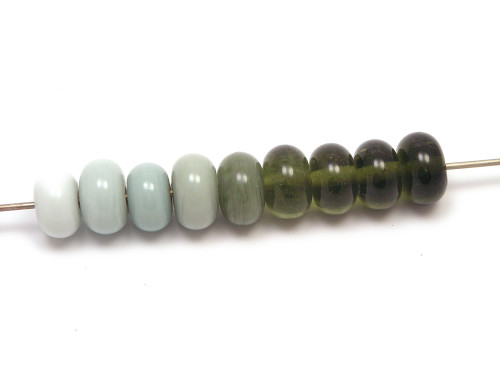 I love so many things about mixing these methodical gradations of color. I learn a lot as the dark colors unfold and show their true essence. I would not have guessed that that beautiful soft almost pottery glaze-like color would emerge while going from this dense transparent algae color to white. It reminds me of a tea set that a friend from Korea gifted us.

It surprises me that the four beads on the right all have white in them of different amounts and get darker as they have less white but still look fully transparent but BAM! the 5th bead from the right is opaque all of a sudden. 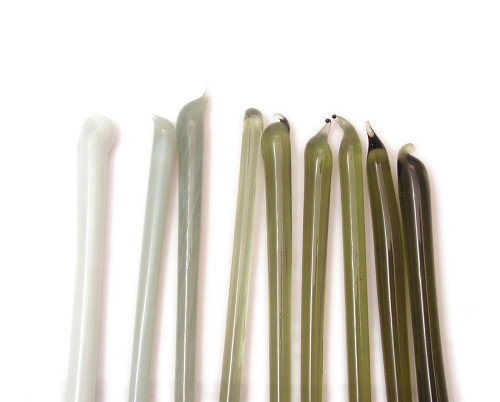 It also always surprises me when there is a huge jump from one to the next, almost like there was some huge change in the proportions. There is a lot of room for more mixing in this string.

It interesting to me that that the 2nd, 3rd and 4th from the left don’t really seem to go in a logical order. When I see that I always think I need to re-do my test to make sure I ordered them right. I am pretty methodical though and keep them all in order and marked while on the mandrel.

Now I am curious to see what these colors do when layered in stringer for my micro mosaics and also when layered in dots on a bead, another thing that fascinates me. How you can mix the color but then get totally different colors when layering in different ways. Stacking dots gives a way different effect than when used in a murrini and stood on their sides. I bet the murrini even looks different when applied in a flame rather than fused. 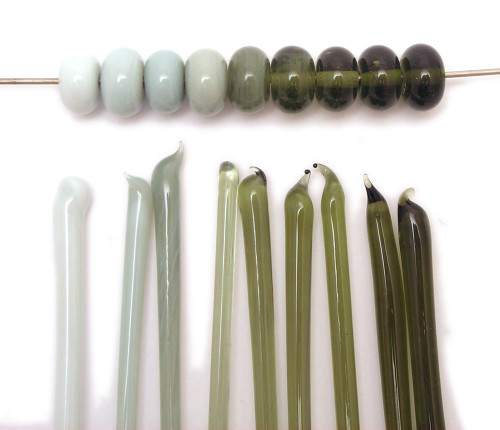 And look there. The beads look even different than the color pulled into rod form. Crazy, I tell you. I wonder if Dietmar gets more consistent results (I’m sure he does) or if he also experiences strangeness that can only be due to the nature of how glass becomes the colors it becomes.

You know, I could go into a cabin up on a mountain and never come out and still not even scratch the surface of the properties of glass colors. More to come from this strand indeed.

Two blog posts in two days. What, you wonder, is happening over here? Well, kids back in school and an hour earlier start for the 11yo this year means I’m back to days to myself with an extra hour to boot. Although I forecasted yesterday where I am heading, I will not be so bold to do that with my blog because I have found that it is the one thing that gives when other things come up. But, for now, let’s enjoy it.

Yesterday I spouted off about grand plans, big vision. Today I show you what happens between those times of getting down to it. Mindless work for those days when it just isn’t clicking, the brain isn’t working and I just don’t feel like working at that level in the studio. 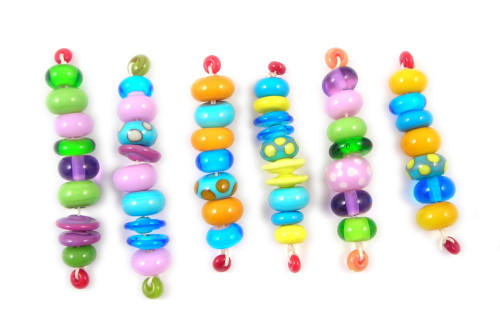 I’m talking spacer beads. I have a “build your own pen” station at my November studio show and it is always a hit. Some bread and butter cash-ola that helps me be able to do the haughtier ‘art’ pieces. I love me some spacer beads, even if I wouldn’t know what to do with them myself. I am considering an all, tiny spacer ‘chain’ for micro mosaic necklaces.

But anyway…more brainless stuff that I love to do is color mixing. You’ve seen my efforts throughout the year whether it be from my polymer clay days, bracelet beads or now the mosaics. Check out what I experienced last month at the Gathering: 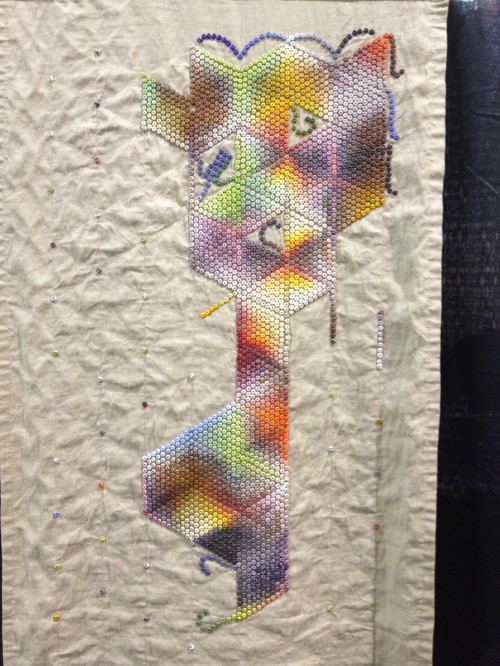 Dietmar Kuehlmorgen’s color studies. This huge tapestry is a humongous undertaking that involves pulling stringer of color, painstakingly weighing portions and scientifically-based mixing different amounts. It blows my mind. I love how he has the small beads sewn to a tapestry because it can be displayed beautifully (while being functional) as well as rolled up and carried. 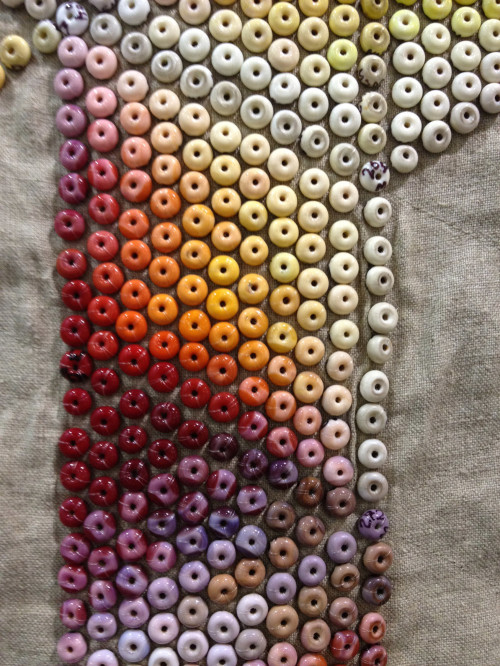 While I would never purport that I could do this comprehensively, I sure as heck have it in the back of my head as something that would be fun to do for those ‘brainless’ times. Yes, there is planning, but once you sit down to mix the color it’s just sitting at the torch and twisting some rods.

I do love color mixing and have a nice little library of my own however, it’s not this pretty! Mine is stringers taped to notebook pages. Dietmar rocks.