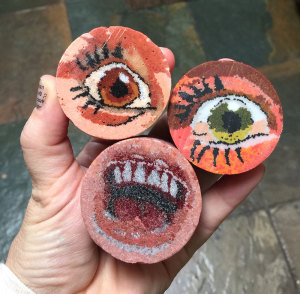 First let me clarify what I mean by beginning writer. That phrase in itself is probably grammatically incorrect and illustrates the point well enough. Beginner writer?

I’ve written gobs of pages on blogs throughout the years, plenty of bead-making articles for magazines, and even a booklet of glass tool instruction that was independently published. I have also written my fair share of papers throughout 19 years of schooling–19.5 if you count that extra semester of college it took to take that one more class I needed.

This, however, is the first time I’m setting out to write a novel. A real book. No offense to article writers or bloggers. Those things haven’t felt like I qualified as a writer for some reason. Maybe because it came easy and they weren’t daunting tasks. The booklet felt a little that way. Craft, art, whatever. I’m not here to open a debate. I’m a beginning (beginner?) novelist. That works better, yes?

In my last post way back on October 9th I announced that I’d be doing NaNoWriMo this month. Well the month is almost over which means only 5 more days to hit 50,000 words. I’m at 31,000. Do you want to hear the excuses? I prefer to think of it as an explanation for why I’m not going to reach the goal.

I started out thinking it would be a Young Adult book and have tried to push it in that direction however, I don’t think I’m edgy enough, yet. It surely doesn’t fit the plot I’ve created this time around either. So I’ve decided that it’s middle grade (ages 9-12) but more of an upper middle grade (ages 10-14). I have no idea if I’m accurate in that and I’m going to leave it open for further debate.

I’ve written all 60 of my scenes, I like my voice, and still need to go in and plump it up with some scene building, character depth and more intrigue and conflict. So, I am into the second draft phase. I do not think that work will give me 20,000 more words and it goes much slower than writing the first draft. I can try but I just don’t see it. I could maybe get it up to 40,000 and I’m ok with 30-40,000. My  justification/rationalization is that middle grade is ok in that range. So that works out nicely although, I’m not going to win NaNo with this model and I don’t feel like writing that many more words just to have to cut them later, in order to say I won.

Everything I read says less is better in MG. I agree with that and I think that is why I’m finding a good fit. I look pretty chatty here because this is stream of consciousness writing and there are a lot of unnecessary words on this page which  doesn’t fly in a novel–maybe it doesn’t here either. When I write emails or copy I do it with a lot less fluff–only what is necessary–so that the reader doesn’t get bored and click away or pass over it.

I am learning so much and I love that. I’m getting better because of it. This process also makes me miss blogging though, where I can just sit down and type what’s on my mind and not worry too much about how it’s going to link to the next scene, or the ending, or what so-and-so said in chapter three.

I also am getting some good lessons in perseverance and battling self-doubt. I’ve read through my scenes so many times that I’m bored with the story. I have to remember that I know the twists and turns, where they happen and where they’ll end, and new eyes are fresh.

I will keep you posted on my progress and what I’ve already learned along the way.